Funeral on the Swanage Railway (March)

Restoration of the Roof of the Old Mortuary Chapel (May)

The Passenger Train to Carry the Dead (18 October)

The Last Journey of the Unknown Warrior (27 October)

Lecture to the Friends of Kensal Green Cemetery (11 November)

Trustee of the Friends of West Norwood Cemetery (19 November)

May I draw your attention to the devastation of the historic landscape of Brookwood Cemetery?

Work is currently being undertaken by South Bucks Tree Surgeons under contract from the Surrey Wildlife Trust on behalf of Woking Borough Council. On the grounds that these shrubs are “non-native, invasive species and the purpose of removal is to allow native ground vegetation to flourish”, all rhododendrons across this part of the cemetery are being removed down to ground level. This is transforming the landscape of the cemetery into something quite alien.

The work ignores the fact there is ample photographic evidence proving that rhododendrons have been a major feature of the cemetery landscape for at least 120 years.

But not - it would seem - for much longer. 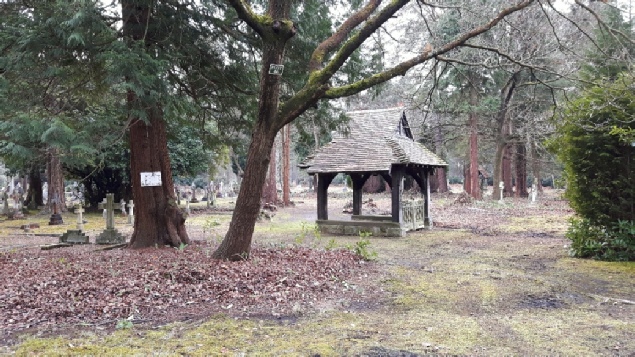 The St Alban’s plot: utterly denuded of its privacy and seclusion (and they’ve missed a bit on the right-hand side)

One of my favourite plots at Brookwood, the burial ground for St Alban’s Holborn, has been destroyed by the complete removal of all the surrounding rhododendrons. Its peace and privacy has been completely shattered. Whilst what Pevsner described as “a sombre complex landscape” is being completely transformed since this sorry process is set to continue across the whole southern side of the cemetery.

Had this work been undertaken by the late Ramadan Guney I’m sure the Council would have acted at once to prevent it. To their shame neither English Heritage nor the Brookwood Cemetery Society has commented on these developments; in fact reading the latter’s latest “newsletter” one would be mistaken for thinking this clearance is a mere weeding or tidying process.

I complained to Councillor for Brookwood - Kevin Davis - who appeared to be completely unaware of this drastic programme of clearance. I contacted him on 5 April and at the time of writing (26 April) I’ve had no reply. I have therefore written to the local press and you can read my letter in full here. I hope the letter will be published and make people more aware of what is going on at Brookwood. 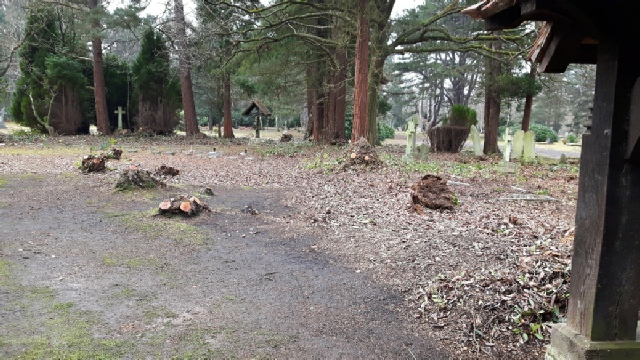 Another view of the St Alban’s plot: both the lych gate and the Tankerton Calvary are now isolated amidst a scene of desolation. Years ago the Burial Society of St Alban’s probably paid for the rhododendrons to be planted to screen their section. This provided visitors the privacy and seclusion they sought when visiting the graves of their loved ones. Its former atmosphere of a country churchyard has been completely extinguished.

Funeral on the Swanage Railway: March 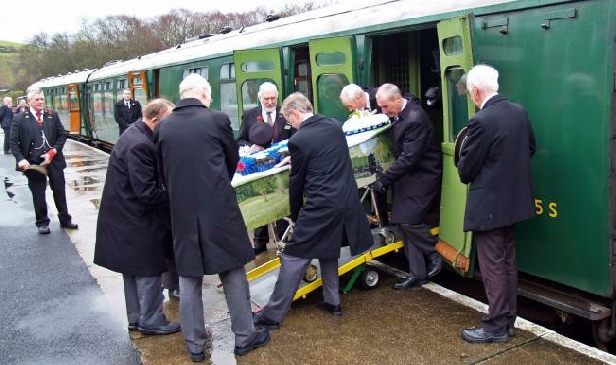 His funeral train was hauled by preserved 0-4-4T M7 Class No. 30053 and comprised two Bulleid coaches. One of these, No. 4365, contained a luggage compartment in which Mike Stollery’s coffin was placed for this final journey. It was the same coach he had helped restore for use when trains started using Swanage station again in August 1979. You can read further details of this train on the Swanage Railway website. 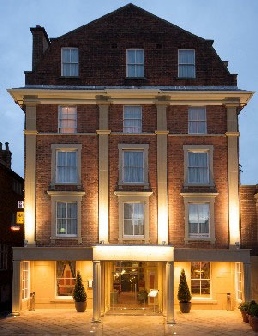 I was privileged to be invited to spend an enjoyable weekend at the Palm Court Hotel, Scarborough, supporting the programme of the Yorkshire Educational & Social Weekend.

The weekend was closed by William Millar BsC DipFD, President of the National Association of Funeral Directors. Following his closing remarks, Mr Millar was presented with a cheque for £1,000 for CLIC Sargent. This was money raised from the charity raffle and auction which took place on the Saturday evening.

As an Oakwood Press author, I was recently informed

that the publishing house is to be handed over to a new owner.

After 31 years, Jane Kennedy, who took over the Oakwood Press from its founder, Roger Kidner, has decided to pass on the press to a like minded person in the form of Richard Stenlake, founder of Stenlake Publishing.

For my book, The Brookwood Necropolis Railway, this will be the third owner of Oakwood Press.

It was Roger Kidner who agreed to publish the original version in 1983, whilst all subsequent editions have appeared under Jane Kennedy’s ownership.

I am sure that Richard Stenlake will be keen to continue to Oakwood style, reprints and new editions in the future. 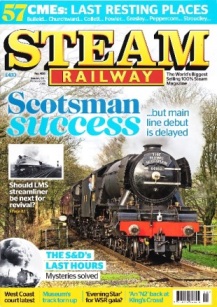 Issue 410 (January-February) of Steam Railway contains an interesting article on “Engineers at Rest”.  Steam Railway has compiled this list which documents the final resting places of 57 CMEs in the UK.

The article includes a map showing the locations of these graves. Unfortunately the map has several errors but a revised version can be seen on the Steam Railway website.

The article ends with six CMEs that Steam Railway was unable to locate burial details for.

I contacted the magazine to assist, since the list included Sir Vincent Raven (1859-1934) who is in fact buried at Brookwood Cemetery. 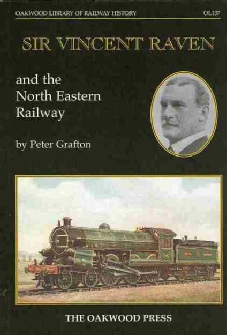 Tom Bright, the magazine’s News & Feature write, replied by confirming this was the “biggest name on the list” whose burial details had not been traced.

He added that the magazine’s own investigations, and correspondence with Peter Grafton (author of the recent Raven biography), nor even Raven’s descendants were aware of the location of his grave.

An update to this article was published in issue 451 (February-March) of Steam Railway.

This includes an updated map highlighting the new graves identified since the original article appeared. 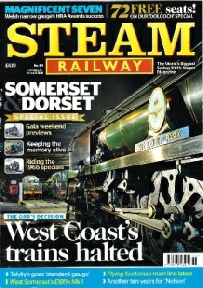 resting places of Lawson Billinton and Robert Whitelegg are still unknown, whilst additional names are being submitted.

Another update is promised in a future issue, whilst I have posted an article about Sir Vincent Raven’s grave here.

Restoration of the Roof of the Old Mortuary Chapel: May 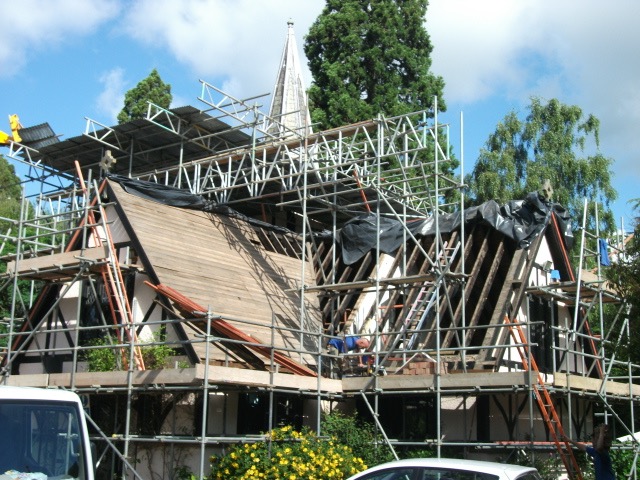 The St Edward Brotherhood is raising money to pay for the replacement of the roof of the Old Mortuary Chapel, which for several years has been showing signs of deterioration. This building was constructed for the opening of the cemetery in 1854 and was the original Anglican chapel. Preliminary work is being undertaken by the Brotherhood’s architect, Irina Aldersley. It was found necessary to make further surveys of the supporting structure, when this could be stripped back. This has been done, revealing that the roof has largely been supported on a wing and a prayer for years, as the main supports have rotted through. The contractors have inserted five steel supports to hold it while work is in progress. The further work that is now essential will cost in the region of an additional £48,000 plus VAT. Donations to the Building Fund can be made online through the CAF portal, and will ensure that the work is successfully completed. 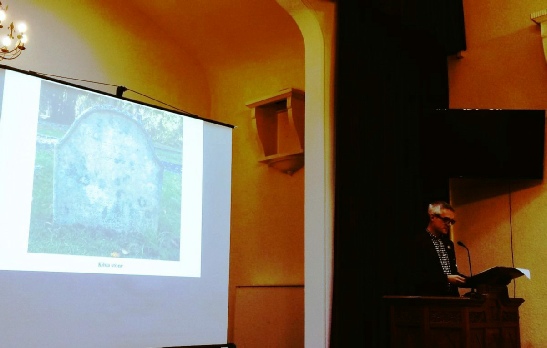 I was invited to present a paper on “Diversity in Brookwood Cemetery” at a one-day seminar held in the Small Crematorium Chapel at West Norwood Cemetery on 5 November. Organised as the Third Magnificent Seven Seminar, the seminar explored many aspects of diversity in cemeteries. This included diversifying visitors and audiences, biodiversity, managing for wildlife, using demographics to engage the local community, the use of social media and encouraging the Arts into cemeteries. The full programme can be viewed here.

The Last Journey of the Unknown Warrior 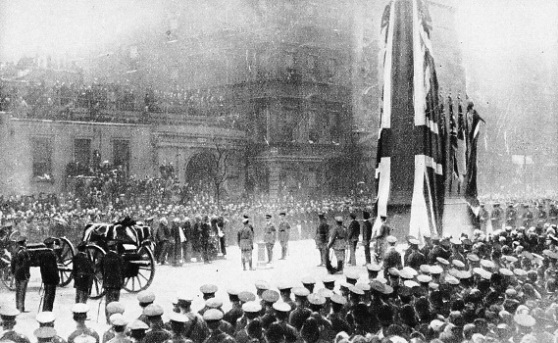 I was privileged to be invited to a special lecture at J H Kenyon on the evening of 27 October. The lecture was given by Brian Parsons to commemorate the 100th anniversary of the Battle of the Somme by describing the story of the Unknown Warrior.

During the lecture, Brian Parsons described the various arrangements made so that an unidentified soldier could be brought back to London to be buried amongst the Kings in Westminster Abbey. The lecture was illustrated by many fascinating and rare photographs.

The Passenger Train Created to Carry the Dead 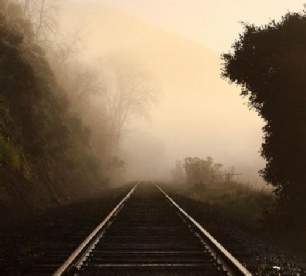 ’ve been assisting Amanda Ruggeri for her article posted on the BBC Britain Autos website on the Brookwood Cemetery Railway.

The article was posted on 18 October and includes a number of quotes taken from our telephone conversation, along with some pictures from my collection. You can read the article here.

The Daily Mail then used this article as the basis of one for themselves. You can read their version here.

The Commonwealth War Graves Commission has announced that 77 new names will be added to the 1914-1918 Memorial in the Military Cemetery. 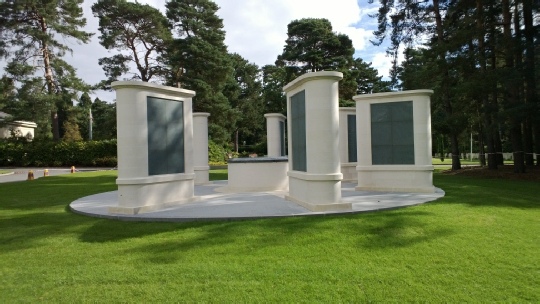 Although the majority of the names have been inscribed on panels at the CWGC’s workshop in France, more than 15 will be engraved at the site and will remember a man or woman who was not previously commemorated by the CWGC, all in time for Remembrance Sunday next month.

The Brookwood 1914-1918 Memorial is a memorial to the missing and commemorates casualties with no known grave. The majority of casualties commemorated are servicemen and women from the land forces of the UK.

All the names being inscribed have not previously been commemorated because they may have come home and died of injuries or illnesses they received from fighting and the CWGC was not informed.

They were not commemorated by the Commission at the time but, through the efforts of relatives and research groups, including the “In from the Cold” Project, these casualties have since been found. There are still many cases to be resolved and the memorial therefore allows for further names to be added.

You can read more about three of the new names by following this link.

I spent two enjoyable evenings speaking on the Brookwood Cemetery Railway at the Frederick W Paine Museum in Kingston. The first lecture took place on 12 July. Such was the demand for places that I was invited to repeat my presentation on 29 September. During the evening access is available to the museum which includes a fascinating collection of materials relating to F W Paine.

A further series of lectures is planned for 2017. 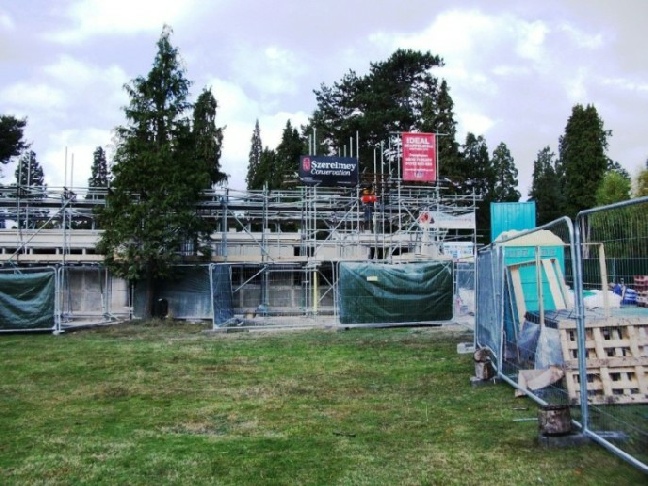 The construction of two new community mausoleums in plot 126 has resulted in the temporary closure of The Crescent, which runs from Western Avenue to the Cemetery Chapel and Oak Avenue. Access to the chapel is now necessarily via Long Avenue.

The two new mausoleums are adjacent to the first pair that were completed by Welters International. The new ones have been commissioned by Woking Borough Council using Szerelmey Conservation Ltd.

Lecture to the Friends of Kensal Green Cemetery 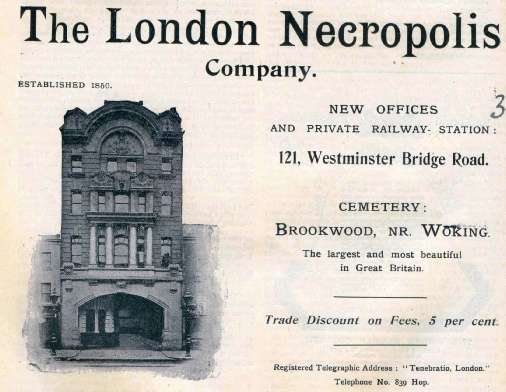 I was pleased to be invited to give a lecture to the Friends of Kensal Green Cemetery on the evening of 10 November. My talk presented an illustrated journey on the Necropolis Train along with an explanation of the railway funeral service operated by the London Necropolis Company between 1854-1941.

Trustee of the Friends of West Norwood Cemetery

At the AGM of the Friends of West Norwood Cemetery on 19 November I was welcomed as a new Trustee. I look forward to working with the Friends on future projects and developments. 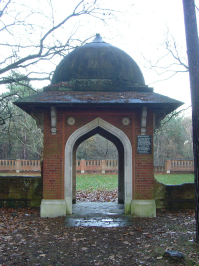 This documentary was broadcast on BBC1 on 3 January. It follows the story of the restoration of the forgotten burial ground for 27 Muslim soldiers on Horsell common who gave their lives fighting for Britain in two world wars.

The film shows the struggle of two understated pioneers - Zafar Iqbal, a Muslim from Woking Borough Council, and Elizabeth Cuttle, a local Surrey historian - as they battle to get this small plot of land restored and recognised as a symbol of an important and largely unknown part of British history. The film also reveals the stories of some of the Muslim soldiers once buried here, and through their experiences the history of the Muslim contribution to the British war effort in World War I unfolds.

Due to vandalism, the bodies of the Muslim soldiers were transferred to the Brookwood Military Cemetery in the late 1960s. I met Zafar Iqbal at last year’s local history symposium where he presented a paper on this project.

The programme is currently available via the BBC i-player until the end of January.