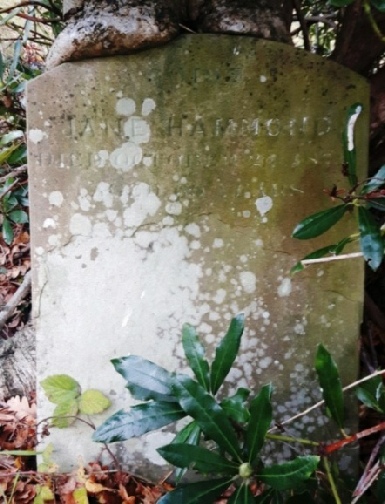 Jane Hammond was a former patient in Brookwood Asylum, where she died in October 1872. Unusually she is commemorated by a headstone which survives close to the car park opposite the Cemetery Office.

According to the Asylum medical records, now held in the Surrey History Centre, Jane Hammond was one of the first women to be admitted to the Asylum, on 19 July 1867. She was transferred from the Springfield Asylum in Wandsworth following the opening of the new asylum at Brookwood.

In 1867 Jane was aged 64 and the wife of a labourer in Frensham. They had eight children together before she became ill in 1841. She was admitted to Springfield in November 1842. At that time she was described as “violent and suicidal”, but on transfer to Brookwood in 1867 she was merely described as “demented” and “a very useful worker on the ward and in the Asylum’s infirmary”. Jane was also described as exhibiting “great vanity and self-esteem” and was “very particular about her hair, making for herself most fantastic collars of net extending to her shoulders.”

Jane’s sister, Ruth Marshall, was also a patient in the Asylum, and they met each other one day on the ward and “embraced each other with great affection and talked for some time with each other”. However, subsequently they rarely enquired or spoke of each other.

Jane died on 24 October 1872 of old age and cellulitis caused by a prick from a bramble.

As was customary for most deaths at the Asylum, she was buried in a pauper’s grave in the plot located between the car park outside the Cemetery Office and the Bagh-e-Zehra burial ground, an area now largely given over to the HS2 reburials. Hundreds of former Asylum patients were buried in this plot.

Unusually her original grave was marked with a headstone. Unfortunately the surviving cemetery records do not indicate who paid for the memorial, although it was most likely to have been paid for by her family.