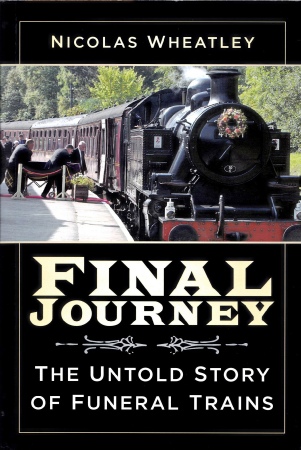 Published by The History Press, 2020

304 pp. Many monochrome and 17 colour illustrations.

This book describes how and why railways were used to transport the dead to their final resting place. It is a tale that, until now, has been largely hidden, often because the evidence for these final fares is difficult to locate. Nevertheless, Nicolas Wheatley has produced an impressive account of these important journeys. Starting from the first recorded rail fatality on the Middleton Railway in 1813, the author considers cemeteries with railways, military repatriations, two airship tragedies (the R38 and the R101), Royal funeral trains, Sir Winston Churchill (and his wider family), and other known (and lesser known) people who were transported by train. Also included are descriptions of the vehicles and equipment used in transporting the dead, funerals by tram, models of coffin carriages, and a review of the cessation of this traffic over the national network in 1988. The author goes on to consider the continuation of this traffic on ‘heritage’ lines.

The role of the railway in the repatriation of the Un­known Warrior in a special van built and operated by the South Eastern & Chatham Railway is well known. The van used was numbered 132 and had been used in 1919 in the repatriation of the remains of Nurse Edith Cavell and of those of Captain Charles Fryatt. The latter had been in charge of a ferry operated by the Great Eastern Railway between Harwich and the Netherlands when he was all­eged to have rammed a German submarine that was try­ing to detain his ship. He was captured and executed by the Germans in July 1916 causing, as with the exe­cution of Edith Cavell, much international out­rage. Van 132 survives (See mytenterden.co.uk/directory/the-cavell-van-article-277.aspx#.X6-VLMj7SUk).

Worthies noted whose mortal remains are said to have been transported by rail to Norwood are George Attree, a funeral director, from Brighton to Victoria in 1880 (this is an error: George Attree, funeral director, died in 1892 and is buried in the Extra-Mural Cemetery at Brighton), and Sir Richard Webster, Viscount Alverstone (1842–1915) (grave 16,457, square 76) from Cranleigh to London in 1915. The author also refers to the ‘gate in the wall on the side facing the railway’, which he speculates may have been used to deliver coffins from scheduled trains. However, it is not clear which gate this refers to (Church Road gate, or the lower gate on what was then Pilgrim Hill), and no supporting evidence is presented. Be this as it may, the book is informative and includes a wealth of fascinating and previously unpublished photographs and drawings. Highly recommended.