Proofs of London’s Necropolis (May)

Centenary of the CWGC: Exhibition at Brookwood (May)

The Death Express at the London Dungeon (October-November) 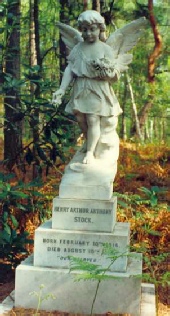 Woking Borough Council has agreed to waive the fees charged by the council or its companies for the burial of children or stillborns of Woking residents buried at Brookwood Cemetery. The unanimous decision took place at a Council Meeting on 9 February, supporting a motion proposed by Councillor Ian Johnson.

You can read more on this story here.

The issue of cemeteries charging for children’s burials generally came to the fore recently when an MP lost her daughter. She was not charged by the Undertaker, as many waive their charges up to a certain age and specification of funeral, but the local authority cemetery did charge fees.

Subsequently Quaker Social Action and one of the child bereavement charities then started a campaign. Some local authorities have dropped their charges, but the overall picture varies greatly.

More recently, to gain a greater insight into these charges across England and Wales, the Ministry of Justice has approached the ICCM to provide this information. Whether further action results from this survey remains to be seen.

The owners of the Red House, the office development on the site of the former cemetery offices and greenhouses, have submitted a revised planning application. This is for a change of use from offices to dwellings. The application reference is PLAN/2017/0109.

A few months ago, the owners submitted their original plans for a change of use from offices to dwellings. This was rejected by Woking Borough Council. It remains to be seen if the latest revisions have more success.

It appears the local councillor for Brookwood, Kevin Davis, will be objecting to these plans as be did previously. 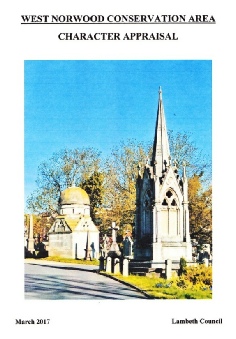 Last month I was commissioned by Lambeth Council to undertake a character appraisal of the West Norwood Conservation Area. This is largely dominated by West Norwood Cemetery, but it does include the historic church of St Luke’s (which faces onto the cemetery) along with a number of very interesting Victorian buildings. The report has now been completed and submitted to Lambeth. In due course this will be released for public consultation before its final adoption by the council.

[Lambeth Council launched its public consultation in December 2020, with a deadline of 11 January 2021 for comment and feedback. The Character Appraisal Document was also made available at this time.] 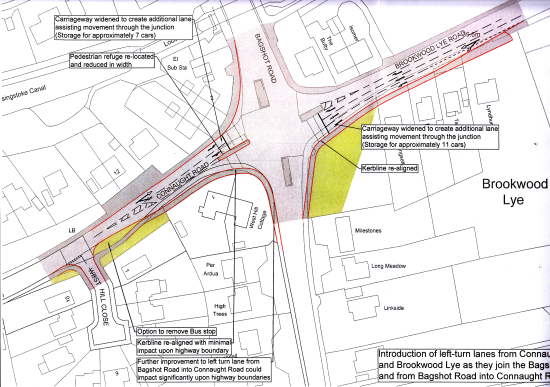 Proposals to improve traffic flows at Brookwood Crossroads have been published. They form part of proposals for a package of work to improve the A322 corridor which has become more urgent since the housing development at Brookwood Farm. One of the improvements suggested was the re-routing of the A324 down Cemetery Pales and improvements to the Cemetery Pales junction. Fortunately this has been rejected for several reasons, principally the fact that Brookwood Cemetery is Grade I listed. Having a major road running through would be highly undesirable, and would require the demolition and rebuilding of the walls to allow a more generous carriageway. This would almost certainly require the removal of graves. However, as a consequence of this decision, it has been recognised that further improvements must be made to the Brookwood side of Pirbright Tunnel.

I am delighted to announce that having been out of print for many years, a new edition of London's Necropolis: A Guide to Brookwood Cemetery, my major guide to the cemetery will be available later this year.

Stenlake Publishing has just sent me the page proofs which I am currently checking.

A new cover is also being designed, the original being covered by copyright which remains with the original publishers.

At the time of writing, no date of publication has been fixed, nor has a price been agreed, although it is likely to be similar to that of the original edition.

Further details will be posted here as soon as they become available.

Centenary of the CWGC: Exhibition at Brookwood

To mark the centenary of the foundation of the Commonwealth War Graves Commission, a free exhibition has opened at the Brookwood Military Cemetery. It runs from 20 May through to 19 November. Admission is free. 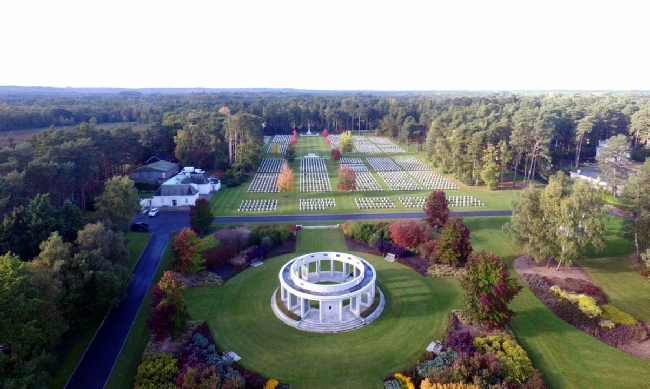 Three Talks on the History of Funeral Service 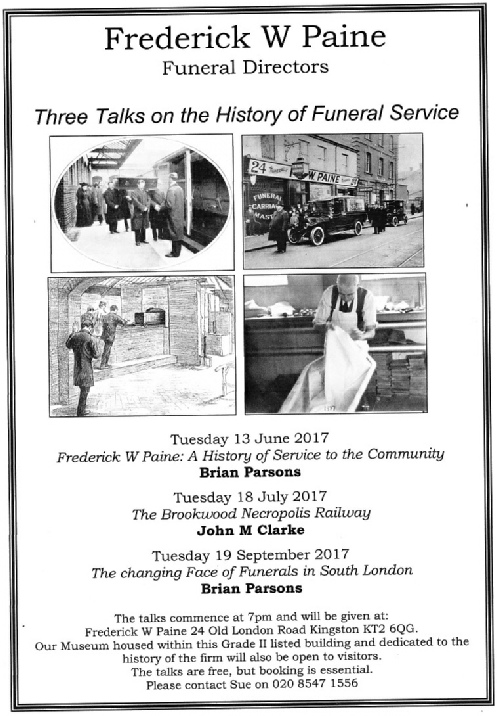 I was privileged to be invited to give this year’s special lecture at J H Kenyon on the evening of 14 September. The lecture was called “From here to eternity: the story of the London Necropolis Railway” and described how railway funerals were operated by the London Necropolis Company via an illustrated journey on the Necropolis Train. 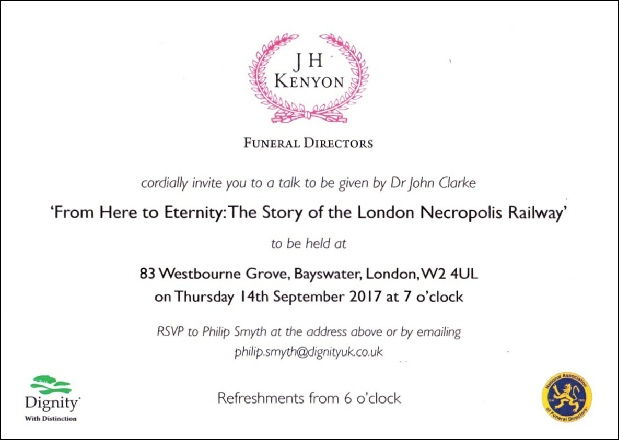 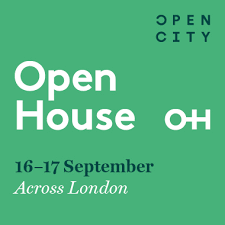 Over the weekend of 16-17 September I supported the 25th year of London Open House by assisting showing visitors around the Frederick Paine Funeral Museum in Kingston. This is the first year it has been possible to be included in London Open House Heritage Days since for the previous 24 years Kingston upon Thames was deemed to be outside London!

As the Open House guide rightly states, “When it comes to digging into the history of Kingston, what better place to start than with a company which has served the area for over a century – a place which keeps detailed records – a business which reflects social, industrial, religious and environmental changes and delivers a service used by everyone. Frederick Paine the funeral directors ticks all of the these boxes and not only do they give regular talks on the subject of their rich history in Kingston, they have created a fascinating museum at their premises on London Road. (Next to the tumbling telephone boxes.)”

Virtually the entire ground floor of the F W Paine premises was on view, including the museum room. The interior, which is panelled oak throughout, dates from 1908 and is now listed Grade II. We were very busy on both days, whilst on Sunday we were the only London Open House attraction in Kingston that was open! The photograph below shows the F W Paine team (Ian, Dawn {Branch Manager}, Sue & Brian) plus myself. We used the open days to raise money for Macmillan Nurses. 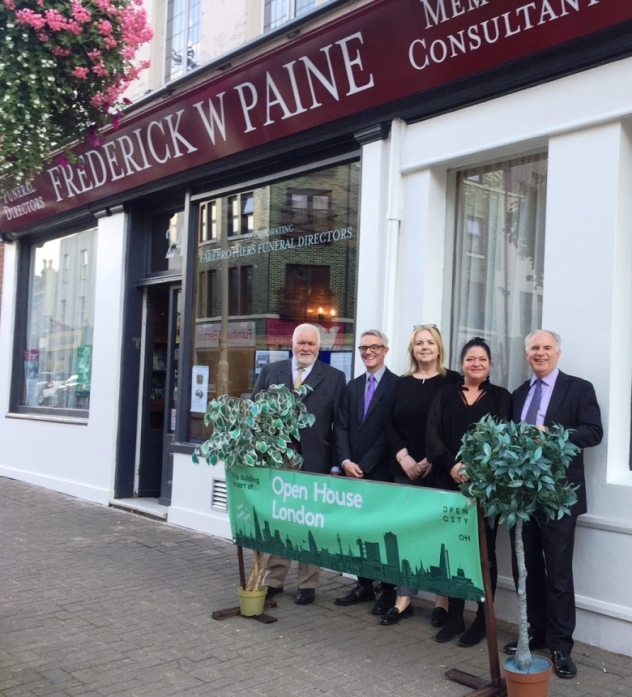 London Month of the Dead

I was delighted to be invited to support this year’s London Month of the Dead programme by giving a lecture on the Oblivion Express at Kensal Green Cemetery on 7 October. The talk was sold out beforehand and the audience asked some very interesting and challenging questions afterwards. 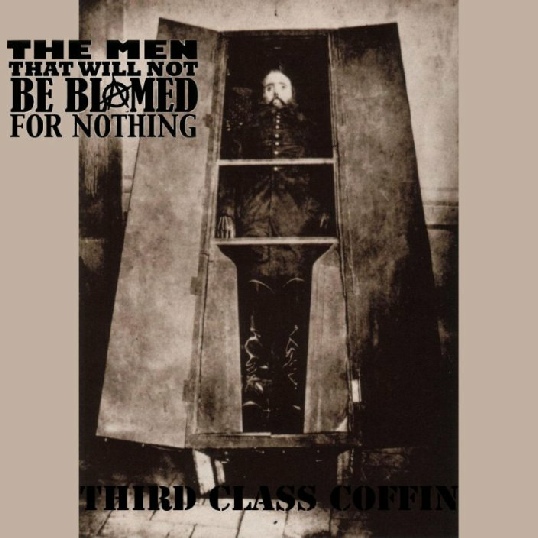 Thanks to feedback from my lecture given at Kensal Green Cemetery for the London Month of the Dead, I am sharing details of Third Class Coffin by The Men That Will Not Be Blamed For Nothing. Listen, enjoy and donate!

The Death Express at the London Dungeon 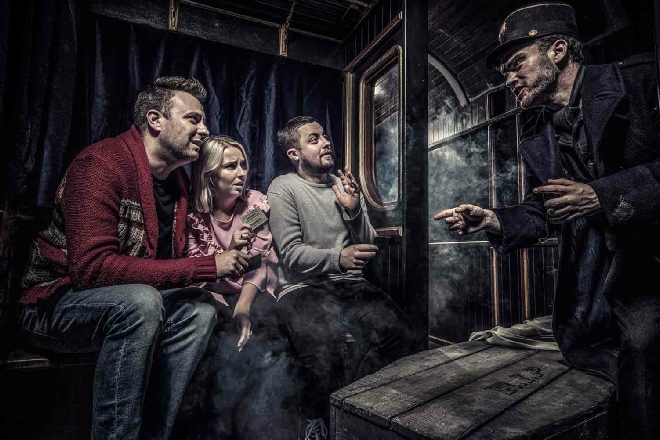 The London Dungeon has announced a new attraction for Halloween 2017. The Death Express invites you to experience one of the scariest journeys of the 19th century aboard the Necropolis Train. Described as “a one-way ticket for the dead and a restless ride for the living” the London Dungeon promises “full scream ahead!” You can read more in an article from the London Evening Standard.