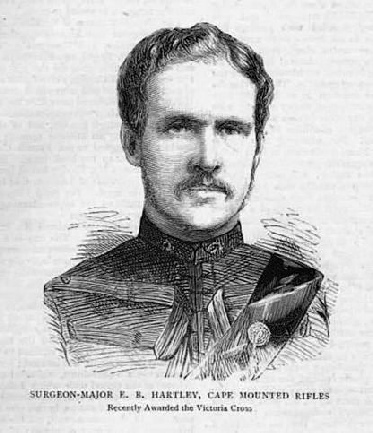 Edmund Baron Hartley was born in Ivybridge, Devon and educated privately and at St George's Hospital, London. Hartley was a clerk in the Inland Revenue between 1867 and 1869, before his appointment as District Surgeon in Basutoland (1874-1877). He then became Principal Medical Officer of the Cape Colonial Forces (1877-1903) and Principal Medical Officer of the Cape Mounted Riflemen. Hartley served during the Basuto War as a Surgeon-Major with the Cape Mounted Riflemen. Hartley was awarded his Victoria Cross for his action during an unsuccessful attack on Moirosi’s Mountain, Basutoland, on 5 June 1879. citation from The London Gazette (issue 25023 of 7 October 1881) reads:

"For conspicuous gallantry displayed by him in attending the wounded, under fire, at the unsuccessful attack on Moirosi’s Mountain, in Basutoland, on the 5th June, 1879; and for having proceeded into the open ground, under a heavy fire, and carried in his arms, from an exposed position, Corporal A. Jones, of the Cape Mounted Riflemen, who was wounded. While conducting him to a place of safety the Corporal was again wounded. The Surgeon Major then returned under the severe fire of the enemy in order to dress the wounds of other men of the storming party.”

Hartley was later promoted to Surgeon-Colonel and served during the South African War. For his Boer War service he was created a Companion of the Order of St Michael and St George. He passed away at his home in Ash, Surrey. 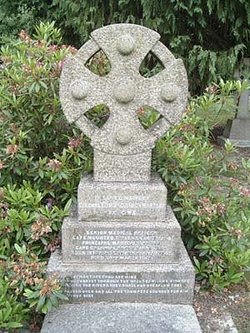 The grave of Edmund Baron Hartley VC, in plot 2