The Exhumation & Reburial of Edith Thompson 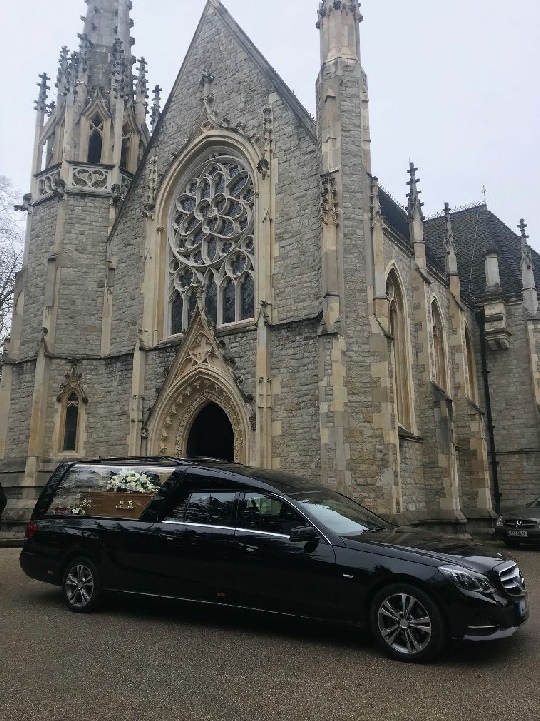 During the early morning of Tuesday 20 November 2018, the body of Edith Thompson was exhumed from Brookwood Cemetery. For the first time since 4 October 1922, Mrs Thompson was in the hands of people who really cared for her. Her departure from the cemetery was witnessed by Prof. Rene Weis, his wife Jean, alongside Nicki Toay, granddaughter of Edith Thompson’s cousin.

A private ambulance drove Mrs Thompson away from Brookwood on the first part of a three-day journey to rejoin her beloved parents in the City of London Cemetery.

The private ambulance conveyed her to the premises of Frederick Paine, Funeral Directors, in Kingston. Later that day, she was transferred to a private chapel of rest in their head office in Old London Road. On Wednesday 21 November a select number of visitors paid their respects.

The funeral took place on Thursday 22 November. The cortege left Kingston mid-morning on its journey to take Mrs Thompson home. The route taken was via Kingston Hill to the A3 and thence across the River Thames via Southwark Bridge.

On arrival in Manor Park, the cortege passed St Barnabas Church, where Edith Thompson was married in 1916; paused outside 231 Shakespeare Crescent, where she grew up; and passed her old school in Kensington Avenue. The procession then moved on to the City of London Cemetery. 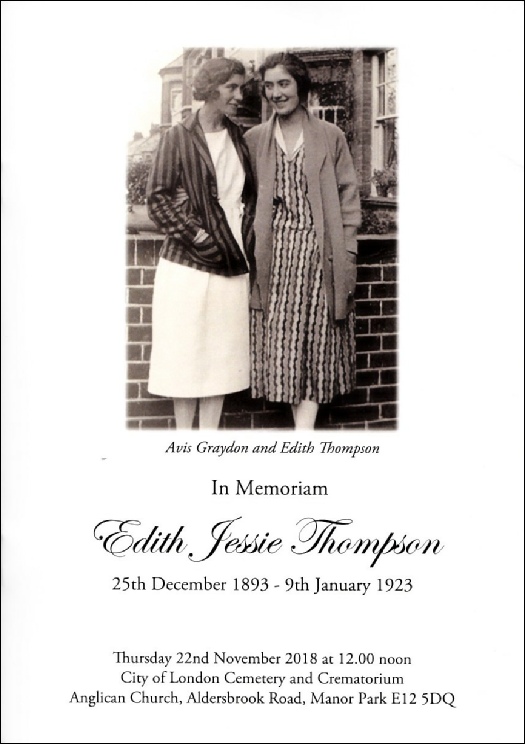 After arriving at the Anglican Chapel, her coffin was taken inside for the Memorial Service, led by Father Brian Creak. A moving sequence of tributes, extracts from her letters, and music followed. The service included a recording of Edith Thompson’s sister, Avis Graydon, who remembered her sister’s wedding day, of visiting her in Holloway Prison, and of her last visit to see her sister on 9 January 1923.

Afterwards, mourners followed the hearse to the family grave nearby. Here her coffin was lowered into the grave of her parents, Ethel (who died in 1938) and William Graydon (who died in 1941).

Mrs Thompson was home at last. [1] 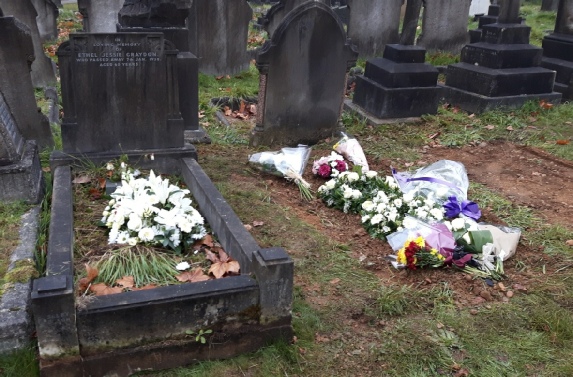 At Rest with her parents in the City of London Cemetery

On the morning of Monday 19 November, Professsor Rene Weis was interviewed by John Humphrys on the Today Programme, and by Vanessa Feltz on Radio London.

You can read more on Mrs Thompson’s funeral in the Independent and in The Newham Recorder.

[1] In 1988, Rene Weis concluded his biography of Edith Thompson by commenting that, “Edith Thompson remains in unconsecrated ground in Brookwood Cemetery. So far her body has not joined her parents, as her mother hoped when she lay dying in the upstairs bedroom at 231 Skakespeare Crescent on the eve of World War II. Had the Home Office or the Prison Service cared to inform Avis Graydon of the transfer of the bodies from Holloway in 1971, Edith Thompson would now truly be home with her parents.”

This biography was originally published in hardback by Hamish Hamilton in 1988. It was subsequently issued in paperback by Penguin Books in 1990 with a postscript reproducing a letter written by the author to the Home Secretary arguing the case for a posthumous pardon. The revised paperback edition of 2001 retains this postscript along with a new and expanded preface.

The most recent biography of Edith Thompson.