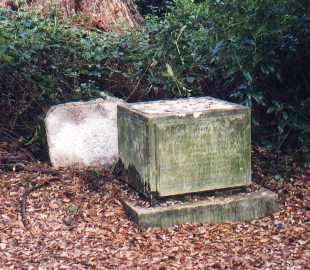 During my period as Chair of the Brookwood Cemetery Society, the Committee agreed to fund emergency repairs to the statue of Elaine Falkiner (1871-1900). This is a brief description of the work that was undertaken in 1995-97.

In May 1995, the statue of Elaine Falkiner was forcibly removed from its pedestal (see photo on the left). The rose and and fingers of the left hand and forearm were damaged, whilst the edges of the plinth were slightly chipped. The incident was reported to the local police and to the Cemetery Office.

The damage was discovered after a guided walk that had taken place on the afternoon of 7 May. Having been reported to the police, and Inspector and a forensic expert were sent to examine the statue.

The Society’s immediate concern was to get the statue removed to a place of safety, a task which was by no means straightforward. Despite offers of help from local stonemasons, the task proved too ambitious. Whilst various solutions were explored, a “Special Projects Fund” was established by the Society to deal with similar emergencies and/or restoration tasks should they arise. Meanwhile the statue was covered with two body bags, to help protect it during the winter months, and was camouflaged with branches and brambles. Fortunately it remained undisturbed in its private enclosure.

In fact it took over a year before the Society could arrange for the statue to be restored and repaired. This delicate task was undertaken by the specialist stonemason Peter Sleath. Peter began the job in three days at the beginning of October 1996. 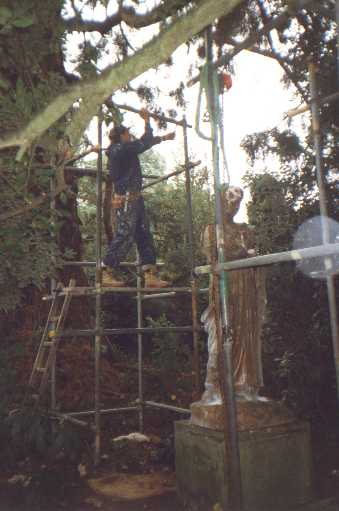 Peter undertook a site survey earlier in 1996. This allowed a proper assessment of the work required to restore the statue onto its base. Once on site, Peter erected two scaffold towers which together supported an iron girder. This beam took the weight of the statue and thus allowed it to be slowly lifted back onto its pedestal.

The two scaffold towers being dismantled by Peter Sleath  following the successful reinstatement of the statue.

The statue was secured to its base with a resin compound and fastened with several stainless steel bolts. The statue’s left hand, and the rose which she is holding, were made good with resin and fragments of the original stone. The discolouration of the stone, inevitable from its prolonged period on the ground, was cleaned as far as possible. The two large inscription panels, one for Elaine and one for her mother (Anna Maria de Lorentz Farmer, who died in 1927), were also cleaned.

Peter advised the Society to ensure that topsoil around the base should be moved to help prevent damp penetrating the base. In undertaking this task it was discovered there was a third inscription panel, commemorating Elaine’s brother, Henry H Farmer, whose ashes were placed in the plot following his death in October 1944.

Whilst the work was in progress, we contacted the Woking Police to see if they could patrol the area, which they agreed to do.

The Brookwood Cemetery Society is indebted to Peter Sleath for accomplishing this “rescue” so successfully. It was the Society’s first major restoration project, and paved the way for many others; some of which are described elsewhere on this website.

The photographs below show some of the restoration work taking place. 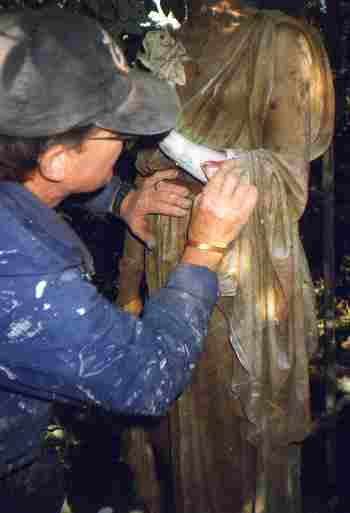 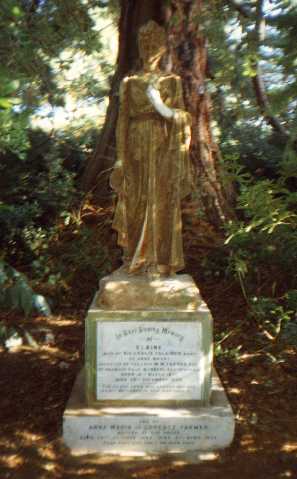 A photograph of the restored statue which clearly shows repairs to the forearm and the cleaned inscription panels. It was only later we discovered a third panel commemorating Elaine’s brother Henry.