Born in Lambeth in 1823, James Hollowell was a private in the 78th Regiment of Foot (later The Seaforth Highlanders), during the Indian Mutiny. He was awarded the VC for his actions during the siege of Lucknow.

“78th regiment, Private James Hollowell. A party, on the 26th of September, 1857, was shut up and besieged in a house in the city of Lucknow, by the rebel sepoys. Private James Hollowell, one of the party, behaved throughout the day, in the most admirable manner; he directed, encouraged, and led the others, exposing himself fearlessley, and by his talent in persuading and cheering, prevailed on nine dispirited men to make a successful defence, in a burning house, with the enemny, firing through four windows. (Extract from Divisional Orders of Major-General Sir James Outram, GCB, dated 14th October 1857.)”

His Victoria Cross is displayed at the Regimental Museum of the Queen’s Own Highlanders, Inverness-shire, Scotland.

The memorial shown below was erected in October 2000 in association with his regiment. The headstone is of the Commonwealth War Grave Commission pattern and grants permanent recognition of this brave soldier. 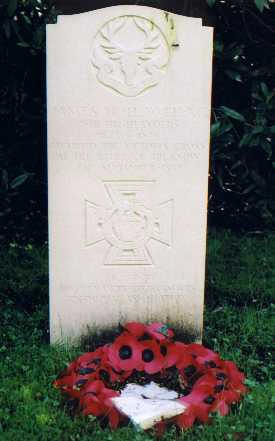